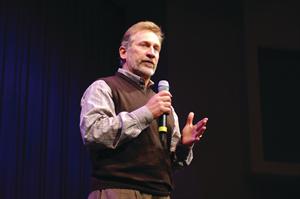 Bargaining Chips
A Louisville builder shares tips on the art of negotiation.

WORDS TO THE WISE. Elite Homes’ Joe Pusateri has found a second career advising builders how to negotiate with customers, trade partners and lenders

Joe Pusateri, president of Elite Homes in Louisville, Ky., knows something about negotiating. In 2006, he helped arbitrate a five-year contract between his city’s orchestra and its musicians union, which kept the orchestra from going bankrupt.

Pusateri now spends some of his time sharing his negotiating skills with other builders. At the recent International Builders’ Show in Las Vegas, he addressed an audience desperately seeking ideas that might get their lenders to loosen their financing leash for construction, development, and acquisition; and might help turn tire-kicking shoppers into home buyers.

What builders must appreciate, Pusateri said, is that negotiating and bargaining are now “normal” elements of any transaction, whether builders are dealing with banks, subcontractors, or customers. The trick is to address each negotiation unemotionally—“when I get mad, I get stupid,” he admitted—and to keep any deal’s consummation from hinging on one intractable negotiating point.

Pusateri breaks down negotiation into three stages, 10 principles, 10 basic rules, and 19 tactics. At each point, the key to negotiation, he explained, is to understand what the other side wants, avoid making quick decisions, leave yourself some wiggle room, and deal from a position of strength, which Pusateri thinks builders can gain even in the direst of circumstances.

“Banks don’t want your property back, no matter what they tell you,” exclaimed Pusateri, who sits on the board of King Southern Bank in Louisville. He also noted that banks are under “huge pressure” not to retrieve land “because they are going to take a hit” in lost loan reserves.

But builders shouldn’t just sit back and wait for banks to act. “We have seven development loans in Louisville, and I have their renewal dates circled on my calendar so that I’m proactively approaching the bank 60 days before that date to set the climate and manage its expectations,” he told Builder in a subsequent interview. In those meetings, Pusateri typically comes armed with graphs and charts that make his case and give his lender a clearer picture of how Elite is faring against the rest of the market.

Pusateri had just put his theories to the test when he successfully negotiated a $690,000 loan for a new subdivision by convincing the bank that its investment “would give them better collateral” with finished lots. And because Elite already had buyers for the homes it would build on this land, the loan was more palatable to the bank because Pusateri could pay it down quickly.